Cléa van der Grijn is an artist based in Sligo. Her deeply personal work has often delved into matters of mortality and memory, and her latest touring exhibition JUMP is no exception. I recently got a chance to sit down with Clea to discuss the new exhibition, her influences, and the variety of media she works in.

Why did you call your recent exhibition JUMP?

I called the exhibition JUMP because there is a sense of suspension in jumping where time can hold still, since you are neither here nor there. Jump is a place in between.

The exhibition is a combination of my paintings and a film that I’ve written and directed in collaboration with a soundscape creative called Joseph P. Hunt and cinematographer Ciaran Carty. Michael Cummins designed the pod which it’s viewed in. The pod is really important because I am in control of each person’s experience – so I know that if you see it in Sligo or Dublin or America or wherever, you will all have the same experience. I think the word is immersive; I wanted it to be an immersive experience. Experiential.

How do the paintings relate to the film?

The paintings are like instants of the film: very beautiful little flickers. Stills, which hopefully give  one, time to reflect back at what was experienced. The smaller are like moments, flickers of the film.

[The paintings] were painted alongside the making of the film. I have a fairly big studio. This was where we did all the editing and tech for the film. I wanted Joe, Ciaran and Michael to see my process while working on the project, and allow them to respond to it in some way.

I know exactly what I want. So, I strive to act on that vision. Professionalism is important when working with others. Even though I can be exacting, it’s the same expectation I lay on myself.

Can you talk a little about the film?

What I hope to do with the film is put forward questions to the viewer. I want to create a platform for a narrative, for a dialogue. I want people to engage, and maybe to keep still for a little while. To gather their thoughts and reflect: what is death and what is life? What are memories, real and perceived?  What about false memories? Can they become real memories? I really just want people to stop and think about mortality and life.

The film does not intend to be disturbing. But it is, meant to make people consider what death is. It gives us a little moment of reflection, where we can perhaps almost project our own feelings onto the film. Yes, it could be about death but that is only a very small thing, and the culture around death is a very large conversation.  This is something I’m personally trying to unravel.

Reconstructing Memory presented in The Model, (2015)

Death is a subject you have touched on in the past.

You’re talking about Reconstructing Memory which was a rather huge exhibition I did in (The Model Gallery [2015]. Limerick City Gallery, Rochester Arts Centre USA and Solomon Dubli) It was a real in-depth investigation into culture’s relationship to death, in particular Mexican death traditions and how they compare to the Western sense of mourning.

When I started the project, my whole family went to live in Mexico to understand the culture of death. It was quite a lonely experience making a show by myself of such size. When working on that, my only direct involvement with other people was with my family. And god love them, they spent two years growing and cutting marigolds!

Reconstructing Memory presented in The Model, (2015)

Elements from Reconstructing Memory like marigolds appear in the film. Can you go into that?

Within Mexican culture on Dia de Muertos,  dead souls are drawn back by the very pungent smell of the marigold. Marigolds play a strong role in both Reconstructing memory and JUMP.

Repetition is also really important to me: I don’t know if it is my rhythm or if it helps my mind to stay clear. Even though my paintings are different to one other, there is still a form of iteration to the paintings. Even if you go back, back, back, there are elements which are reused continuously in my practice.

The death mask was another element from Reconstructing Memory. I have three death masks made. The masks were made because I think that people are celebrated when they die but not while they are alive, and I find that quite interesting. Why? Why this way and not the other way round? Why does Irish culture or culture generally prefer to celebrate the dead and not the living. This is what the death mask asks.

When it comes down to it, there are similarities between Reconstructing Memory and JUMP. As I continue to develop this state of “in-between” in my practice I am aware of things becoming simpler, of a paring back. Of allowing the essence of my subject to be more …  perhaps subtle.

I am also looking out more for references whereas before I always looked within.

Going back to what you said about eyes; one of the paintings literally depicts eyes. That has to be deliberate?

The eyes in the painting are a reference to the hand-blown glass balls from Reconstructing Memory. They are direct replicas of my eyes. I should say that the painting is called Ways of Seeing (which is based on the title from a book by the writer John Berger). I believe that, as the title says, you don’t necessarily need your eyes for seeing. If you just remain still, you can see with your heart or your emotions. There are so many different ways of seeing without your eyes. And when you die, the first thing to go are your eyes. I have a lazy eye myself, and eyes have always been important to me. I’m aware of the many other ways of seeing. 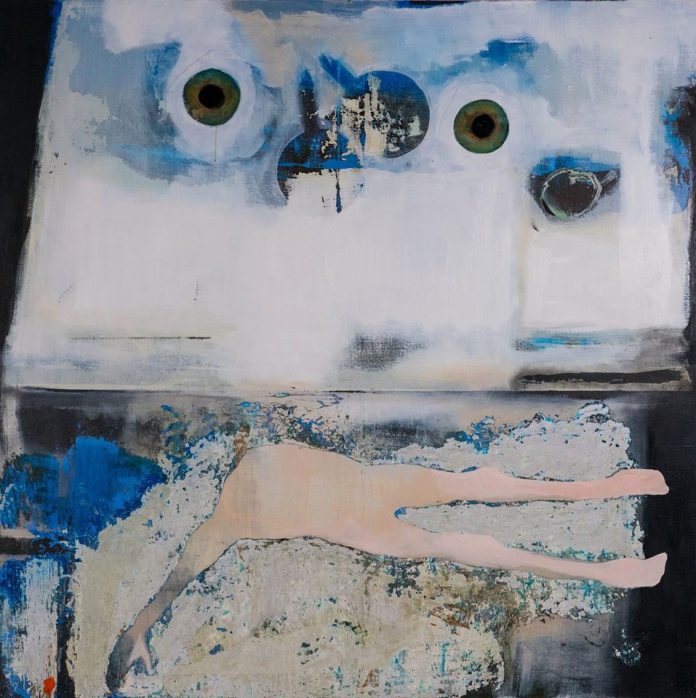 I love titles, but I think that once you title something, that’s it. It can often close ways of interpreting a work, so it can be a delicate balance. 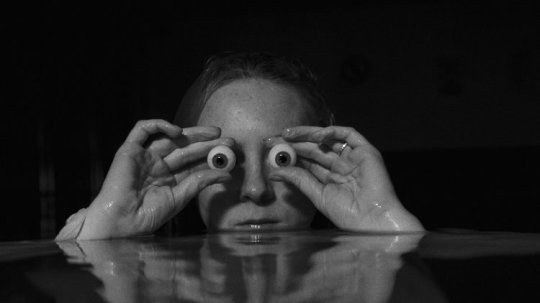 That’s interesting that the name comes from Berger’s book. There seems to be text written into the painting itself.

Reading is something that is really important to me. I am a voracious reader. I have book shelves  which I live vicariously through. I’ve just read Marina Abramović’s memoir.

I like to write and often write in my work, I wrote a book which is now finished. Most was done in solitude over an intense two-week residency in Cill Rialaig, overlooking the Skelligs.

JUMP as the book is also called is a fictional memoir. A tale of wicked truths interwoven with dream, imagination and dark thoughts. JUMP is a celebration and a curse about dysfunctional families.

It is about addiction and the search for a way through.

The protagonist is a young woman whose experiences and memories (both real and perceived) are outlined from her birth to the death of her brother, when the story abruptly ends.

Writing it has enabled me, as an artist to have more confidence in my practice.

Let’s delve into your influences. Are there names that come to mind?

That’s a hard question but I can say that seeing the work of Francis Bacon when I was either ten or eleven had a huge impact on me. It sticks with me as the first time that I really became enthralled in a work. Because I was brought up around art, I didn’t notice it most of the time but I remember seeing Bacons painting well. We were visiting a little chapel in the south of France and the Bacon painting was there. I remember just going, “woah!”.

What’s next for you?

I’d love to make a feature film but I need time to breathe first. The film has been picked up to premier at the New York independent Film Festival (NYIFF). So, I would like to let this digest. I’ve only just started painting again. Where is that going to go? I don’t know. I have to keep working in some capacity. If you don’t, things won’t happen. You can’t just switch it on and off. It’s something you have to keep active but I’m keeping my options open.