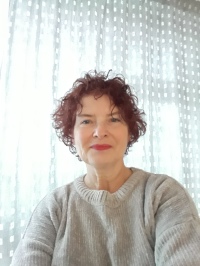 Fionna Murray was born in London to Irish parents before moving to Ireland where she now resides in Galway. It this questioning of identity and how it relates to environment that informs her work. It is something that I can relate to having spent part of my childhood in England myself before moving back to Ireland. I was lucky to have had the opportunity to have studied under Fionna in GMIT to discuss art with her was very formative for me, and getting to sit down again with her to discuss her work was a privilege. I hope you enjoy this look into her practice and what drives her.

Tell me about your approach to your work.

When it comes to making work, I like the mediation of the photograph. You are looking at something that isn’t the actual thing, and that is contained. Through the observation of the photograph you can also begin to see things that you might not have noticed on a fleeting viewing. Working with film adds another interesting layer – the way a still from a film is a split second, and that the movie is again a finite thing to work within. It gives you boundaries and limitations on subject matter, but that paradoxically, allows for great freedom to do with it what you want.

I also enjoy that sense of separation, between you looking and the thing being looked at – I like the idea that this is artifice, that it’s not a realistic take on the world. The notion of the painting as a parallel place, and the freedom to make something that’s slightly awkward. I would hope that the work is ambiguous enough to support these readings.

Let’s talk about your recent work Metropolitan Pastoral, since that uses film as a jumping-off point.

The exhibition Metropolitan Pastoral in Sligo in 2019 was a development from a body of work I did in 2016, shown in London at the Eagle Gallery, which was a series of watercolours responding to Blow-up, the Michelangelo Antonioni film based in London in the 1960s. 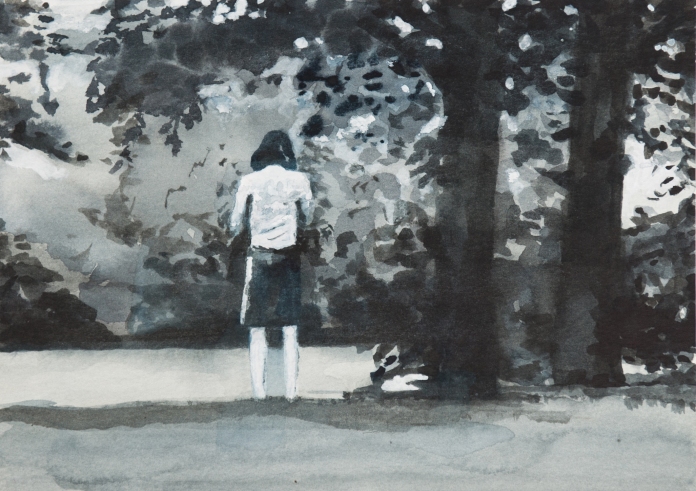 I had been painting watercolours from photos of shopfronts and different random things, while at the same time I had been watching films based in London. Blow-up was one of those films. I already had a distinct memory of the film, and it had a real effect on me, that resurfaced when I watched it again. The plot wasn’t what interested me in the film – it was the imagery of London, nearly every still in that film was a possible painting. There was a dislocation in the film with a sequence set in an ordinary city park.  One image from Blow-Up was similar to a painting I had been doing before – a rose bed in a park. I decided to paint a watercolour of a still from the film, not thinking it would go anywhere, but then I kept stopping the film as I watched it on my laptop and began to make more and more paintings from the stills! And that eventually developed into the series Blow Up and other Stories.

It was interesting to me that the director Antonioni, an outsider, was able to pick up on the atmosphere of London at that time – albeit of a particular but very creative and influential scene.  I could identify with it;  somehow as I was growing up I could feel the energy and sense of possibility in London at that time and Blow-up really captured a certain quality in London but also, crucially, something else, a darker more mysterious and ambiguous reading that makes the film so compelling.

London is really important to you, isn’t it?

I was looking back at London, but as I made the watercolours they also became something to do with me being in Ireland. My parents grew up in Ireland before they went to London after the war, and home to them was Ireland, and now I’m here living in Ireland. So I’m sort of thinking, which is home – is it London or is it Ireland? And something about that shot of Vanessa Redgrave standing at the edge the park, with her back to you, I could identify with her figure looking into this rural image, you know?

It’s always about this idealistic place that you can never quite reach. Maybe doing the paintings is a way of living in a world that you can create, that you can be in for a period of time in order to resolve something. For me, Metropolitan Pastoral isn’t just nostalgia: the work isn’t about pining for another time, it’s looking at how an environment can affect a person and maybe their sense of self. 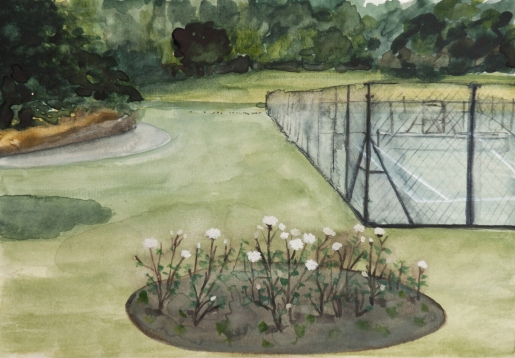 All the same, it’s that classic thing, isn’t it? Writers are always looking back at the place that had the most substantial influence on them. I might have thought I’d be making work about Ireland or of Ireland, but the strongest draw is still to do work about the place that formed me. Maybe it’s because visually you’re taking in so much when you are growing up, and those images embed themselves into who you are.

In a way, the second-generation Irish over in England are an invisible ethnic group, because they look like everyone else there. Even their accents are English a lot of the time. It’s an interesting phenomenon. Second-generation Irish often want to be known as Irish and not British, so there are all these funny nuances and our parents would talk about ‘home’ – which was where you would gradually grow to learn wasn’t where you were living.

You added acrylic and oil paintings to the series – can you talk about that?

The watercolours were such a beautiful thing to do in themselves and I didn’t feel the need to make larger versions of them.  I had to take a different approach to making paintings on canvas, and my intention was to break the image down and abstract the forms somewhat from the original source. So, you wouldn’t necessarily make a connection to Blow Up in the reading of them. I continued to use stills from the film, but the image takes on a life of its own in the physical making of the work – for instance, the painting Stroll On isn’t in the film, but the idea of the building at night time with sound escaping, developed from the music club that the photographer goes into in the film. I also combined the fence pattern from the tennis court into the base of this painting and that juxtaposing of imagery is the freedom of choice that making a painting offers.

Grid like elements are quite common in your work, can you talk about that?

The idea of paintings within paintings interests me. I often see painting as problem-solving; I like the paintings to look like puzzles that have to be deciphered and sometimes I enjoy the monotony and repetition of making grids like chequer boards. Even hidden things are a game, and that is the creative part of putting on a show. In Amp, the amp shape is another canvas that is not apparent until the viewer examines it more closely -there’s a sort of materiality and layering that brings the image back to the physical surface of the canvas.

I made a diptych called The Girls in Their Dresses, that stands out from the rest of the work in the Metropolitan Pastoral exhibition because they are painted in a clean graphic style different from the rest of the works. They are taken from the patterns on the dresses of the two young girls who come into the photographer’s studio at the beginning of the film. When I looked at the dresses, they were like abstract paintings. So why not make them into paintings- which hold a secret – because they are dresses!

I recently I saw a documentary about Blow Up, and apparently, Antonioni painted the dresses because the colours in the cloth weren’t strong enough and that revelation made me go “brilliant”! Those dresses were actually painted! That knowledge made the painting of the diptych all the more enjoyable. Antonioni’s attention to detail also extended to having the grass in the park painted extra green; his use of artificial means to heighten reality created a lucidity to the films he directed.

Let’s talk a bit about your inspirations.

There are many but someone who is an inspiration both in his beautiful brave paintings and how he talks about his practice is Philip Guston; the process in the studio, and his honesty about the doubt that’s involved and taking risks within the work. I’m thinking of how he changed from this sublime abstraction in the 1950s into a sort of cartoony figuration throughout the 1960s and beyond. He took a massive risk at the height of his success but creatively he had no choice. Those paintings can’t be appreciated in reproduction. They have to be seen in terms of being big physical luscious oil paintings, and not just cartoon pictures.

Rose Wylie is a real inspiration in that material sense; when something doesn’t work she sticks another piece of canvas on top and continues painting over the top of that! There is an obvious thread back to Guston in her work as well. Her paintings are far rougher around the edges than mine, but they are really inspiring for their embrace of awkwardness and joyful humour and poetry, and she’s in her eighties! How great is that!

Another influence would be Tal R, the Danish painter. I think Tal R is very material in the way that he builds up his surfaces. I saw a retrospective of his work at Louisiana Gallery outside Copenhagen – there were a lot of shop-fronts and sex shops from Copenhagen in the work. And just the way he rendered the architecture of the buildings with a quality like children’s books that gives an innocence to the painting that is not there in reality. The most recent paintings have these beautiful surfaces that look like chalk pastel. But I think it’s this idea of a window into a fantasy world with no recognisable figures that interests me.  It suggests this sort of imaginative possibility behind the closed doors. I think there may be something about the windows and the shop displays, an idea of a theatrical space. It’s artificial and it’s ideal; an ideal world that the window creates.

thank you Adrian Mc Hugh for your work editing