Jamie Cross working on, 240v every other 15mins

I recorded this interview in March just prior to the full lock-down we experienced in Ireland and the exhibition in The Dock that we talk about in the interview has as of publishing  this interview (06/08/2020) been postponed to a later date. I met Jamie through the ARC (Art & Research Collaboration) MA at IADT, and in that time, I have been lucky enough to see Jamie discuss the development of his practice well before we even sat down to do this interview. The way that Jamie approaches his practice and how he naturally integrates his interests into his work is so effortless. I hope to get across his intelligence because the pieces he makes are quite remarkable, not only from a technical standpoint but theoretically as well. There are so many ways that you can appreciate his work, and this is all deliberate on his part. I enjoyed sitting down with Jamie, and I hope you gain as much from the interview as I did.

You have quite a tactile understanding of objects. Where does that come from?

I think it was originally from when I was a child. I used to take stuff apart because I was curious about how it worked. Granted back then I never put anything back together. So, I pretty much used to break stuff!

A lot of my work really starts with this curiosity about how something works. Then by wondering this, the next step I take is to try and explore its inner workings. There is a space created inside an object which I always think is kind of fascinating. These are often objects that we all use, but they are never really considered.

What is the role of technology in your work?

I love using technology, it really drives my practice, but I don’t want it just to be about that. Even though I use a lot of software, I don’t want it to seem that what I do is a software-driven practice. I’ll use video, but I’ll always come back to the question of how I can bring sculptural elements into the work. I’m always exploring how digital and sculpture can work together, so the final piece is often kind of an amalgamation of the digital and the sculptural. I feel that that they need each other to work and I find that interesting.

A lot of my works are explorations of themselves. For example, with Acer Aspire 5732Z, I wanted to show its inner workings, but keep it as a recognisable object, for the viewer to know that there is something going on here inside the object. We can recognise this laptop is an everyday thing, but there is also more to the inside of the laptop, there is more to the actual object. 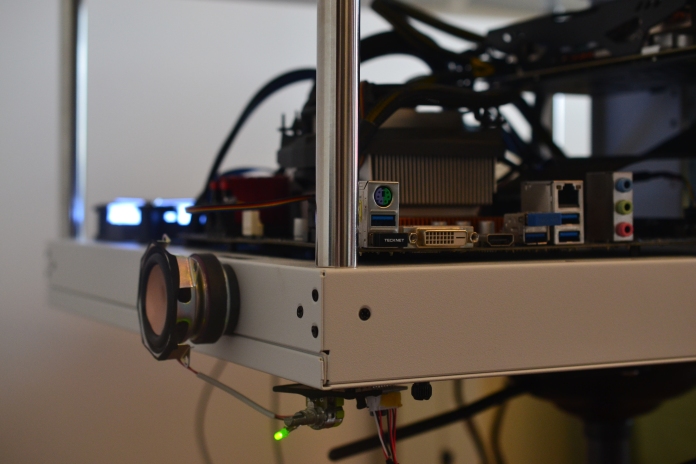 For the piece Display, Sound, Power I actually built the computer that the work was being displayed on. I started the build out of necessity for an exhibition in The Dock. I needed a faster machine.  I thought if I was going to build it, wouldn’t it be much more interesting if I try and make this into a sculpture? I built the computer, and it was a working computer, but it wasn’t doing anything for me sculpturally. It just looked like a computer, so I decided I needed it elevated. At first, I tried putting it on the wall, but when I tested it there it wasn’t interesting enough for me. It wasn’t until I put it on the office chair via the brackets that it clicked, and I don’t know how I came around to it but suddenly it became a sculpture in itself. As soon as you stick it on a plinth, it becomes this object that people walk around and look at, but sticking it on the chair, it becomes much more a sculpture. Personally, I love it when two random objects come together and can somehow make sense!

Let’s talk about the digital aspect of Display, Sound, Power.

Visually I was inspired by advertisement screens around Dublin City.  I was thinking that technology can do so much, but they are using it to show just one image. I thought I would see what I could do with imposing that kind of restriction on myself, and if I’m honest, I had to fight my own urge to have a video on the monitor. But once I settled on the right image (of the escalators), I was happy with it. What was most important was that everyone knew it was working. With the image of escalators, there’s certain movement in it, there is so much going on in this single image, whereas a video would almost be too busy! Like running, running, running.

Inspiration for Display, Sound, Power,  an advertisement board in Dublin city centre

Having the monitor in portrait as opposed to landscape helped as well. It suddenly throws people off. They can see that it’s a monitor, but why is it in this shape? Why is it tilted back? I was looking to buy a new laptop, and the salesman kept on saying it was an “ergonomic laptop” and “the ergonomics are great.” And I was wondering, what is ergonomics? I started looking it up because I was interested in that word and how it was used to sell this object. It’s still just a monitor, but all of a sudden, it’s this “ergonomic” monitor. “Designed for efficiency and comfort for working.”

An example from photo notebook

I’m interested in the design of objects, why an object is designed to do certain things. That, and I was also interested in just playing with the fact that the monitor was able to be twisted. Originally I wanted to have the monitor at a more extreme angle, but I think with the image, there were already so many little angles going on in the image. Just having it in portrait mode was enough. It’s probably the piece that I am most happy with.

What is a day in the studio like for you?

My studio space I suppose is a bit of a weird studio space, because it’s my living space as well. Generally, I try and break up my day. Half the day I’ll do digital stuff looking at photos, research online and stuff like that, and the other half I’ll do hands-on work. I really enjoy taking things apart and exploring the material of something.

Because I work in my apartment the whole time, I almost wonder if I had a studio, would I be making the same work? Because in a studio there would be nothing until I brought it in, whereas when I’m working in my apartment, I’m responding to what is around me.

240v every other 15mins which I made for my grad show, and which was shown at the 2019 RDS Visual Art Awards, came about when I was working in my apartment, and a light in my kitchen was just flickering. There was something wrong, and I was wondering why this light was flickering. It was annoying me, so I started taking pictures on my phone and taking videos of it. Then when I went back looking over the videos and the pictures, I noticed that the phone was capturing the light as green. With the naked eye, I couldn’t see this neon green, and it made me question why it was doing that. From looking at these photos and videos, I started researching how light works. There’s all these kind of atoms in the fluorescent tubes, and when the electricity travels through the wire and hits the atoms, for a split second the whole thing goes green. Because the electricity excites the atoms so much, and immediately there is this flash of green, and then they come down, and it becomes the white light that everyone knows. I was really interested in capturing that moment when the atoms hit, or the electricity hits the atoms in that kind of inner space of this florescent tube. The finished piece ended up being a replica of that light, but made in a neon green colour. I originally had it flickering as well, but I felt that it wasn’t necessary. Generally, my work is a cycle, starting with asking a question and figuring out how it works, then normally showing my findings in an artwork in the end.

The book The Poetics of Space has influenced me a lot. It is about how, for a space to exist, it has to be experienced. For example, a house is nothing until people start living in it. It is just a box, and only when people start living in it does it become a home. So it started with that, I was exploring aspects of houses, the space between the walls of a house. Eventually, I started questioning, how does a space of… say the inside of an object, how does that become a space? Because we can’t fit in that. No one can. I started thinking to myself, “Well maybe through my exploration of it, taking it apart and looking at each inner working piece of it, maybe I’m producing the space through that experience?” I want people to take note of space in all its forms.

How would that interest in space manifest in an exhibition?

Something that I like doing is the setup of work in a gallery. I like to imagine where people are going to move and what they are going to look at. When I plan a space out, I’ll start with something visual that is eye-catching. I want to draw the viewer into this space. When I go into a gallery, I like something to capture my attention straight away, something that gets me asking questions. “What’s that?” Or, “What is going on with this piece?” I want my work to elicit that response from others when they see it, and then position works around that, which they can explore. I use SketchUp as a tool to plan out the space before an exhibition.

I try and highlight aspects of the space I’m exhibiting in. For example, in The Dock, there is a set of stairs in the building that are near some high walls. One of the pieces I have been working on uses a clothes horse, and it’s bright green, it has this real eye-catching element to it, so the plan is to hang a clothes horse high on that wall. This is an everyday object that everybody knows, but suddenly it’s like, “Why is it up there?” I’m making people aware of the space. Using its positioning to make the viewer look up rather than just looking forward. I like that line to bring people around the space; it creates a path through a space. I’m interested in how that can be done through the placement of works.

The space changes the work, and the work also changes the space.  Selecting work is very important as it can lead to a different feel in a space. When work is installed in a space, it can really change that space completely. I am interested in the comparison between the exhibition space and the object in that space.

You can find out more about Jamie Cross’s work through his Instagram page, link below

thank you, Anne James for your work editing