Tricia O Connor is a Kerry based artist who’s perspective on art could not be replicated by anyone else. Her enthusiasm is infectious, and to talk to her reveals the great passion for art that drives her forward.  Speaking to her recently about her work, her personality shines through from her painting and her projects like the Feminist Tea Party and her Crafted workshops. 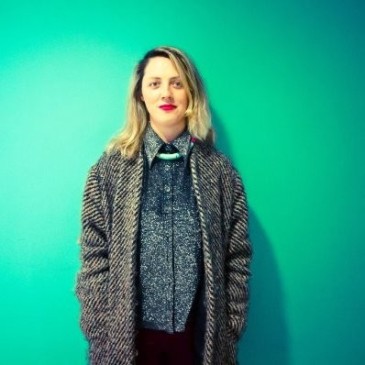 This transcript has been edited by the interviewer for the purpose of this blog.

Let’s start with your project 40 Paintings in 40 Days.

So I recently had an exhibition called Anchor The Flow in Killarney, run by the Art House Gallery, which is run by a former winner of The Screaming Pope prize in K-Fest, Tracey Sexton. I had an exhibition there, and set myself the challenge of doing a painting a day for forty days. I decided to do the challenge to create a conversation around the reasons we create, and I hadn’t painted properly since I was in college. The element of getting back into painting again was a driving force, because I had been doing a lot of socially engaged work and I wanted to get back to what had gotten me into art in the first place – and for me, that was painting. The emphasis on production in the challenge was to get me to create without thinking – to see what type of a body of work would emerge out of that.  And it was getting really hard around the thirty day mark, if I’m being honest!

Being Irish, the forty days element has a connotation with religion for me…

Hahaha! It takes forty days to retrain the brain to do anything, so the number was about retraining the brain to access more creative flow! There was kind of a performative element to it.  But in the end, the forty day aspect of the challenge was a means to an end. It got me creating. And when it was done I could look back on how the process affected my work, without bogging myself down with thought experiments while I was making. 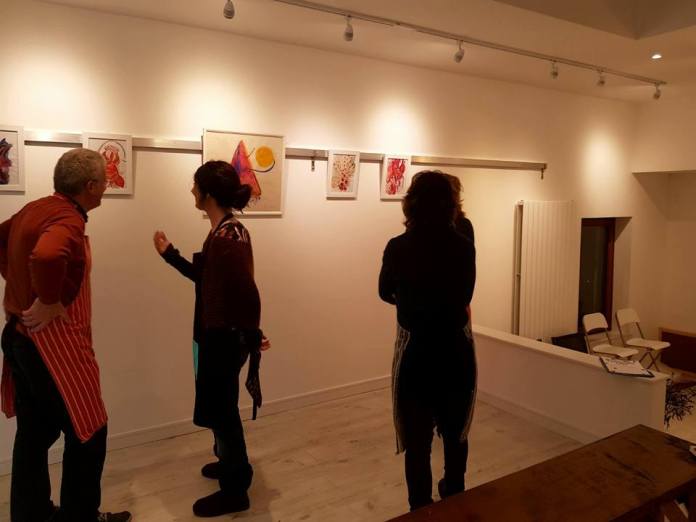 Can you talk more about how the restraints of the challenge changed your work?

What happened was a huge change – I always used to paint in a quite small scale, and after I had finished the 40 Paintings, I found that I started to make bigger work. And now my paintings are moving toward larger projects, so there has definitely been a shift in my style and scale of work. As a practice, it gave me a lot of confidence to create again, and specifically working at a larger scale. For me as an artist, finishing art college and doing the Masters, I got stuck in trying to say something and trying to make a body of work that is relevant. And what I found was that I got so stuck in my head about it, that I actually stopped creating anything. The levels of mental energy it takes up, creating socially engaged art projects… My art practice is definitely going back into painting. It’s a space where I don’t have to think to create, and I don’t have to be attached to an outcome at the end of the process.

Can you talk about your socially engaged practice?

I guess the best place to start is The Feminist Tea Party. I started doing the tea parties when I was studying my Masters in Limerick, and they were a methodology I used to discuss a wide variety of topics concerning women’s rights and feminism. The conversations from each tea party are documented on the inside of each teacup. The teacups are then kept as an archive of women’s history in Ireland. The Feminist Tea Parties are influenced by my love of DIY aesthetics, and there’s an Irish twist on domestic home life there as well. And I love having subversive conversations! For me, it was a really fun methodology to use. And I think people really enjoyed it. 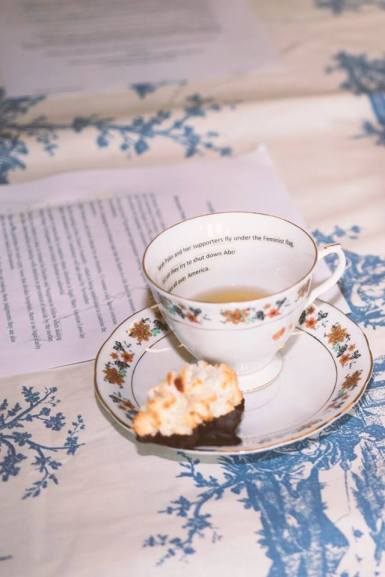 The tea party was an interesting practice, and I’d created an impressive archive of conversations people have been having around feminism and women’s rights in Ireland over the last few years. So I decided to move it into a more specific subject matter, and went on to create an archive around what men and women were thinking about abortion rights in Ireland last year. It was a really funny one, bringing it into abortion rights to have a conversation about it – you would think it would be easy, because it’s everywhere now, but the conversation around it was very stunted. When I got to the point that I was talking about abortion rights, I actually found that spaces and organisations don’t actually want to have that conversation. It seemed to come up against me when I would bring it up. And this killed my enthusiasm for it, and I just stopped.

I think the conversation around feminism flowed much more easily, because it had so many different elements and there were so many different opinions that could come from that. But with abortion rights, many are very guarded about their opinions for fear of being told they are wrong. I’m not saying it is impossible – I had a tea party in Tralee Institute of Technology and had 30 people at my tea party, both pro-life and pro-choice as well as the chaplain, so it is possible to have the conversation. But it is a very difficult conversation to have. I’m influenced by my methodology from The Feminist Tea Party when it comes to my work and how I facilitate my workshops.

Can you go into that in more detail?

I’m doing a residency this year with Crafted, which sets up artist residencies in primary schools across the Kerry, and I’ve become the regional coordinator for the programme. You go into a primary school, and work with a class for two or three months. It’s just an amazing programme – you can choose to work in any discipline. I’ve been doing printmaking, we’re making a play… The kids in the class are eight to ten years old, and the aim of the art practice was to get them listening to each other, and creating something as a group. I’m coming to the end of that residency now. It’s been great, I have been using my experience with meditation and how to do group work from my time running The Feminist Tea Party: I find I can use what I learned for my time learning about socially engaged practice with the kids, and that has been working wonders with their imagination. I mean, when you say ‘picture an artist’, they only think of a painter. I have been trying to teach them through meditation how to grow your imagination, and how to develop ideas to understand that there are more avenues to being an artist beyond just image making and to get them to tune into very specific things around them – like for example, the colour of a boat, or the colour of the trees, or even the sound of the wind. and all these different elements to create a holistic kind of way to get them to tap into their imagination.

With such an ever-changing changing practice, could you talk about your influences?

For me, I’m really interested in listening to people’s conversations and listening to music more than looking at art. I prefer to be driven by influences that I can’t directly replicate, that I have to somewhat translate into my practice. As an example: my paintings at the moment, they’re very abstract and the colours are quite bright, because they are all inspired by conversations that I have had with people.  And because a lot of my conversations are about moon cycles and meditation, I find my work reflects that sort of conversation! The paintings are an attempt at expressing the movement of the conversations, the back-and-forth that takes place. Listening becomes very important when you’re trying to convey this movement, and the work becomes very reflective. 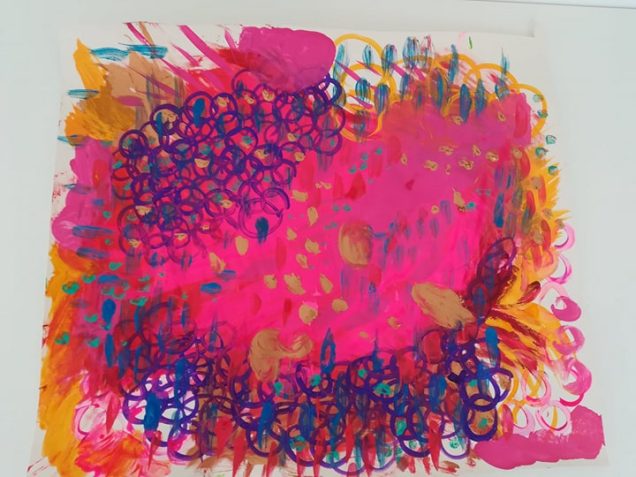 I think everything is my creative practice; to me, everything that I do informs another type of creative practice, whether that’s painting or writing music or any other type of practice. I have my space set up with boards for painting near where I write, so if anything write influences an idea for a painting (or vice versa), I can pick up on that instantly. I might be painting for half an hour and go back later in the day. There is a flow to how I work, where I can move seamlessly to from one thing to another, kind of like jazz; for me everything bleeds into everything else. I love Benjamin Clementine, I love Sun Ra, and improv jazz – and that is the sort of music that would inspire me.

What do you have coming up?

I am on the visual arts committee for K-Fest, an arts festival that shows emerging artists’ works, and it’s been running for six years. On June Bank Holiday weekend every year, the town of Killorgan becomes a space for over 150 artists and pop-up galleries which are set up throughout the town. There are twelve/fourteen people of us on the committee, with Neil Browne as the Artistic Director and Rachel Coffey and myself as the Assistant Artistic Directors. It has a nice DIY punk element to it, and there’s a very good collective mix of painting, sculpture, and others. Every building you go into is completely different from the next. We try and mix it up as well, putting video and paint together in a space one year and sculpture the next, and try and keep the spaces completely different from each other each year.

I’m also working on an online exhibition of my work. I just decided the amount of time it takes to apply to a gallery, to get refused by a gallery and come up with the costs to get my work to a gallery… and in the end it doesn’t even guarantee that the work will be seen! Just all this made me think: ‘why don’t I just use the internet to my advantage?’  It’s accessible to anyone, without the hassle of setting up in a physical space.

You can find out more about Tricia’s work through her website: https://www.triciaoconnor.com/

and thank you Adrian Mc Hugh for your work editing